Iran has continued to ramp up its nuclear program in violation of its 2015 agreement with world powers by further enriching uranium and installing new centrifuges, the United Nations’ nuclear agency said.

The fresh breaches of the nuclear deal came as tensions continued to climb in the Middle East, and US and Israeli officials issued warnings about Iran’s nuclear program.

The International Atomic Energy Agency — in a confidential report obtained by Reuters and published Tuesday — said Iran has begun enriching uranium in its underground Natanz plant with a second cascade, or cluster, of centrifuges,.

Iran recently installed a second cascade of advanced IR-2m centrifuges at Natanz to enrich uranium and will soon add a third. Iran was only allowed to use a less advanced type of centrifuge under the terms of the nuclear deal.

The first cascade it installed recently was composed of 174 IR-2m machines, according to Reuters.

Iran’s envoy to the UN nuclear watchdog confirmed on Tuesday the installation of the second batch of advanced centrifuges at Natanz.

“Thanks to our diligent nuclear scientists, two cascades of 348 IR2m centrifuges with almost 4 times the capacity of IR1 are now running… successfully in Natanz,” Kazem Gharibabadi said on Twitter. “Installation of 2 cascades of IR6 centrifuges has also been started in Fordo. There’s more to come soon.”https://platform.twitter.com/embed/index.html?dnt=true&embedId=twitter-widget-0&frame=false&hideCard=false&hideThread=false&id=1356579388263968768&lang=en&origin=https%3A%2F%2Fwww.timesofisrael.com%2Fun-iran-breaching-deal-installs-2nd-batch-of-advanced-centrifuges-at-natanz%2F&siteScreenName=timesofisrael&theme=light&widgetsVersion=ed20a2b%3A1601588405575&width=550px

Natanz is Iran’s main nuclear enrichment plant. An explosion at the site last year, which foreign media reports have attributed to Israel or the US, damaged an advanced centrifuge development and assembly plant.

Iran said last month it planned to install 1,000 new centrifuges at Natanz within three months and that its scientists had exceeded previous goals for uranium enrichment.

Also last month, Tehran announced it was beginning to enrich uranium up to 20 percent — far beyond the 3.5% permitted under the nuclear deal, and a relatively small technical step away from the 90% needed for a nuclear weapon. Iran also said it was beginning research into uranium metal, a material that technically has civilian uses but is seen as another likely step toward a nuclear bomb.

Iran insists it is not seeking to develop nuclear weapons, a position repeated last week by its Foreign Minister Mohammad Javad Zarif.

Tuesday’s report came amid a flurry of activity surrounding Iran’s nuclear program and as Iran and the US maneuvered ahead of expected negotiations.

US President Joe Biden has said he intends to return to the nuclear deal if Iran first returns to compliance. Iran says the US must first remove all of the sanctions it placed on the country after it withdrew from the treaty. 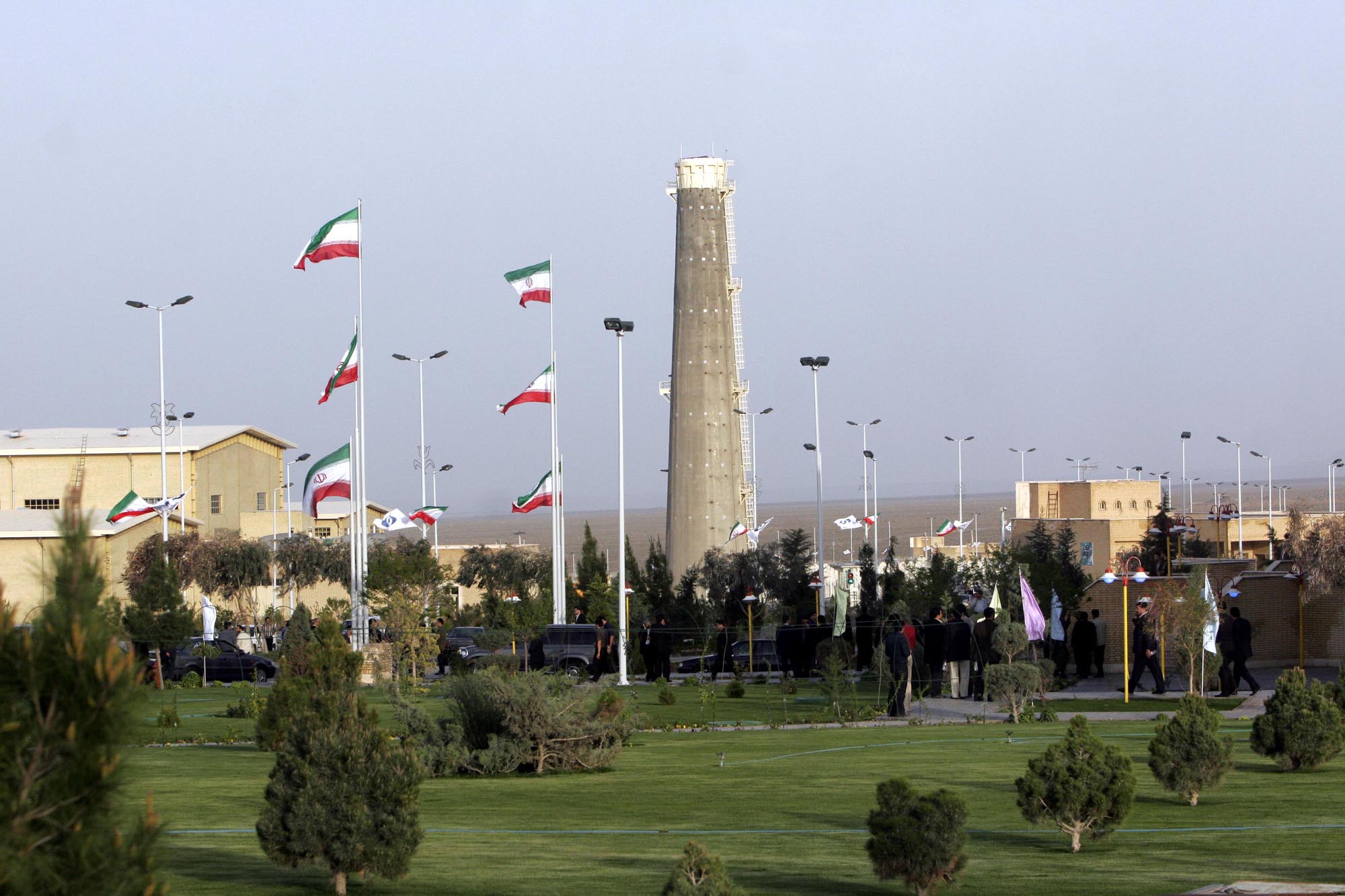 Zarif on Monday asked the European Union to coordinate a synchronized return of both Washington and Tehran into a nuclear deal.

The US and Iran have exchanged barbs, both before and after Biden took control of the White House, including by issuing threats and carrying out military maneuvers.

US Secretary of State Antony Blinken said Sunday that Iran was currently months away from being able to produce enough material to build a nuclear weapon. And, he said, that timeframe could be reduced to “a matter of weeks” if Tehran further violates restrictions it agreed to under the 2015 nuclear deal with world powers.

Iran and the Trump administration exchanged a steady stream of threats before Trump’s term ended on January 20, with Iran also carrying out fresh breaches of the nuclear agreement. Iran’s aggressive moves were believed to be partially aimed at increasing its leverage ahead of negotiations with Biden.

We have some alarming reports coming out of Iran from AlMasdarnews.

According to the sources, the rockets in question were domestically-made Arash guided missiles and were delivered to facilities and camps of pro-Iran Iraqi armed groups.

The sources did not specify what type of drones were deployed, but noted that they were also produced in Iran and are stationed in high-security sites in Iraq’s south.

The sources emphasized that the Islamic Revolutionary Guard Corps could potentially use the hardware to hit targets within Iraq and in neighboring countries in the coming weeks or after US President Donald Trump leaves the White House.

Rezaei commented on the assassination of Iranian nuclear scientist Mohsen Fakhrizadeh , saying: “A new war has begun between Iran and its enemies, and this war is continuing.”

“In any case, this is another war, and it is natural that we are martyred in this war … The war is not over yet,” he continued.

The Secretary of the Expediency Council stressed that “Iran will end the war,” saying: “Iran will bring a catastrophe to the Zionist entity until the Arab countries allied with this entity realize that they have made a big mistake.”

There were military exercises in the Gaza strip carried out by Hamas and allegedly at the behest of Iran. Some pictures and video from Twitter are below.

Israeli Submarine is Moving Towards the persian Gulf

Arab sources are telling Hebrew language website KAN.org that an Israeli submarine is transiting the Suez Canal and the Red Sea on its way to the Persian Gulf as a show of force to Iran. This comes as tensions remain high after the assassination of the Iranian nuclear scientist Muhsin Fakhrizadeh a few weeks ago.

Also Mitt Romney is back on the media trail demonizing Russia and the cyber attacks that were revealed last week. Now Romney is quoted as saying “They potentially have the capacity to cripple us economically, they went to our businesses. They have the potential to also cripple us with regards to our water and electricity and so forth.” You can see where this is going can’t you? Yep, dark winter.

Keep praying and keep prepping! Prayed up and prepped up! Sources are listed below.

The war drums are beating quite loudly and there are indications from sources around the world that say Iran will strike Israel and strike hard! The likely targets? The port in Haifa and Tel Aviv. There could be more but that’s what I have for now.

Intelligence intercepts, air surveillance and satellite recon are ALL pointing to a missile launch by Iran – or its proxies in the Golan Heights – against the Israeli port city of Haifa – TONIGHT.

Iran has vowed to avenge the murder of its top nuclear program scientist.

The remains of the weapon used in the Friday assassination of senior nuclear scientist Mohsen Fakhrizadeh show that it was made in Israel, an informed source told Press TV.

Hezbollah is evacuating their (near Israel) Syrian posts . . . They seem to KNOW an attack is coming.

It’s just after midnight in the region, and things seem to happen between 0200 and 0500

Say your prayers and keep making your preps. God bless and stand firm.

It appears that Israel and the US want a war with Iran one way or another as Iran’s top nuclear scientist Mohsen Fakhrizadeh-Mahavadi was assassinated early Friday morning. Iran has vowed “severe revenge” against whoever perpetrated the attack and have also warned the US and Israel against any adventures during Trump’s (supposed) final days in office.

Others are reporting that Iran’s security council has met and has agreed to strike and take revenge for this act, but it has not been determined who they will strike as of yet. Some are speculating that it could be a massive missile strike against Israel AND the US bases in the region. We shall soon see.

Prayed up and prepped up! Stay ready because this could POP at any moment now! Everything is in place!

Iran warns US and Israel

US tells Russia “We don’t recognize your borders”

The US just doesn’t recognize the border because it was made in 1984 by the USSR. Yet no one has challenged it until now? Why?

The US just keeps pushing everyone’s buttons and it’s becoming clear that they will push Russia, China and Iran into a war with the US that they simply can’t win without using nuclear weapons. I would expect at least some to be exchanged. As always remain prayed up and prepped up, this could kick off anytime now! God bless!

Click the links below to read the full stories.

Posted on November 23, 2020 by dontspeaknews 2 comments

Gee I wonder what they could be discussing with the Crown Prince and the King in Saudi Arabia? To go along with this there was my China/Taiwan report from yesterday which tells me we are very close to war, on the razers edge close! Are you ready?!?

Time is VERY short. Make Jesus Christ your Lord and Savior today! UPDATE IS THE ISREALI NEWS LIVE VIDEO BELOW

Hundreds reported dead or wounded as Warfare Intensifies between Armenia – Azerbaijan; Other Nations Jumping in!

This war just keeps getting bigger with more nations such as Israel, Iran, Turkey and Russia supplying both sides of the war. From Hal Turner Radio:

“Overnight, warfare between Armenia and Azerbaijan intensified beyond belief.   Both sides have brought heavy armor, multiple Launch Rocket Systems, aircraft and thousands of additional troops into the fight.  Worse, outside nations, Israel, Turkey, Russia, and Iran,  are sending convoys of military gear to both sides indicating the fight is broadening very fast.

Hundreds have been reported wounded as reported by CP24.com

“Azerbaijan’s Defence Ministry told the Interfax news agency Monday that over 550 Armenian troops have been “destroyed (including those wounded)”, a claim that Armenian officials denied.

According to Nagorno-Karabakh officials, 59 servicemen on their side have been killed so far. On Sunday, the territory’s defence ministry also reported two civilian deaths – a woman and her grandson.

Of course nothing is for certain in today’s world but everything has lined up for things to start this weekend, including the lockdown of Israel as they became the first nation to do so a second time. It’s NOT for the Corona virus and may say it’s because of the big war starting tomorrow. We shall see. More info from Hal Turner and my video on the subject are below. Prayed up and prepped up!

Iranian President Rouhani told media outlets earlier this week “The United States will suffer a humiliating defeat this weekend.”  He SEEMED to be talking about the expiration of UN sanctions against Iran, but his words seemed ambiguous. Sooooo . . .

The United States has deployed an Aircraft Carrier Strike Group into the Persian gulf.

The USS Nimitz is pictured above as it entered the Strait of Hormuz earlier today.

The Nimitz is accompanied by the Guided-Missile cruisers Princeton and Philippine Sea, and the Destroyer Sterett.

There is a lot to cover and I could go on for an hour covering it all but instead here it is in 15 minutes. Things are on edge around the world.